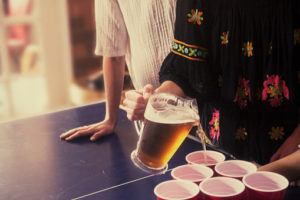 The statement “Underage drinking is a problem in New Mexico” likely comes as no surprise to anyone who knows that we live in a state battling drunk driving in all age groups and have populations who experience higher-than-average rates of alcoholism. But the fact that it is not unexpected does not change the fact that we have a problem—both a civil order problem and a public health issue. And, we need to first be aware of the problem so that we can more effectively approach the individuals and agencies who have the capability to make changes that can help keep our youth safe and on the right side of the law.

Complicating underage drinking is the fact that the law allows certain circumstances under which minors may lawfully possess alcohol and of-age adults may provide alcohol:

Unfortunately, the gray area about whether it is or is not actually illegal to drink as a minor is likely a major reason why New Mexico has a higher prevalence of tweens and teens drinking and binge drinking than the rest of the country. The early age at which alcohol consumption begins and the problematic behaviors that often result lead to real-life consequences and significant economic impact.

The immediate potential consequences of underage drinking are obvious:

The table* shows dated statistics from 2002-2003. These numbers have increased in the last decade, meaning more high school students and young adults are getting hurt and dying because of alcohol consumption. 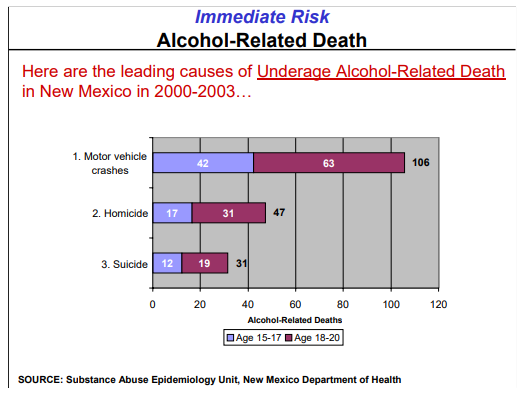 Yet, these numbers only partly tell the story. When minors die prematurely because of alcohol-related events, there is a loss of potential—what they could have done, what they could have contributed had they lived to a normal life expectancy (on average about 55 years longer). There is no way to tally the cost in terms of dollars or quality of life; there is no way to know what innovations or revolutionary ideas may have been introduced to the world.

However, we can calculate what these injuries and the associated loss of productivity cost the economy:

These costs are sometimes paid directly by the families in medical bills and lost wages because parents missed work to tend to their children or grieve their loss. Sometimes these costs are paid by taxpayers and insurance policy holders.

Still, these risks are not the only potential immediate consequences. Underage drinkers may also face DWI arrests. And, a DWI conviction can have lasting consequences that interfere with one’s ability to drive and get a job.

Compared to the rest of the country, New Mexico has one of the highest rates of adult alcohol-related psychiatric disorders (alcohol dependence/abuse as defined in the DSM-IV).

What You Can Do about Underage Drinking

Everyone can actively participate in efforts to reduce underage drinking. Some of the ways you can contribute are common sense:

If you notice any signs of problem behavior, talk to your child right away. Your awareness and interest may be the most effective deterrent. If you need help identifying signs or starting a conversation, you can ask Duke City Recovery Toolbox for resources. We also provide family counseling services and can provide referrals to early intervention programs.